TICKETS ARE NOW SOLD OUT
THANK YOU FOR YOUR SUPPORT BC! 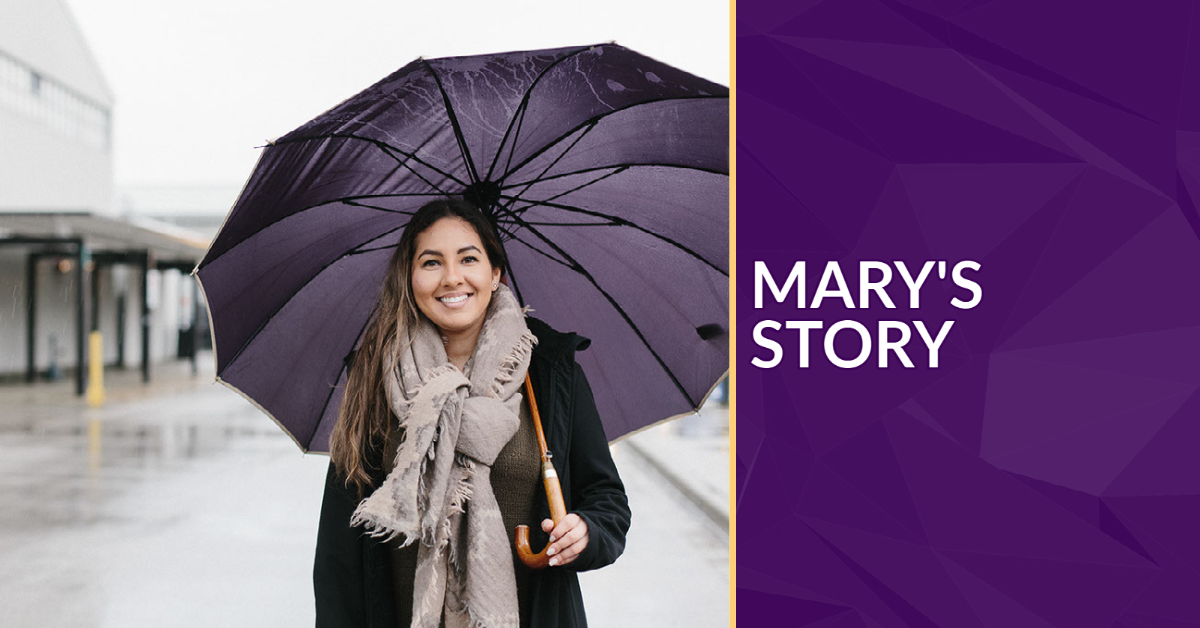 Young Woman Saved From the Brink of Death

This story was provided to the Millionaire Lottery team; original story published on vghfoundation.com

“In all my years of practice, and all of my colleagues in the ICU agree, this was the most severe case of brain inflammation that any of us had ever seen, full stop.”

It was March 28, 2018 when then 21 year old Mary Salas woke up with her right hand feeling numb. She got out of bed and meandered into the living room, shaking her hand.

Mary told her mom about it, but her mom told her she must have slept on it funny.

That made sense, Mary thought, and then went about her day. She had a final exam that evening and she decided to keep her mind focused on that.

Mary didn’t know it then, but she would never make it to that exam. Instead, she would be fighting for every inch of her life in an ICU bed at VGH, suffering from severe brain inflammation and refractory seizures. She would undergo neurosurgery, and be part of a complex and coordinated effort to unmask the rare disease that was plaguing her.

Saving Mary with all aspects of VGH’s neurocritical care program

“When Mary first presented on the ward, she started having seizures because of how inflamed her brain was,” says Dr. Myp Sekhon, Neurointensivist at VGH. “So, we put Mary into a hypothermic state to reduce the swelling.”

Neuro-radiologists conducted MRI scans, neurosurgeons implanted the donor-funded Brain Bolt — a cutting-edge brain monitoring device that utilizes catheters to feedback vital second-to-second information to the medical team. The epilepsy team was performing EEGs and utilizing 24-hour readings of her brain to feed information to the neurointensivists in the ICU, all while neurologists were working on determining the cause.

“There really wasn’t any one member here, but a culmination of every single team at VGH,” says Dr. Sekhon. “I can honestly say if she was at any other hospital in the province, she would have died.”

A day later, they had their answer — Acute Disseminated Encephalomyelitis, a rare auto-immune disease. Simply put, Mary’s immune system was mistakenly attacking healthy nerve coatings in her brain, causing the extreme swelling and symptoms she was experiencing.

“The antibodies were going haywire and attacking these brain fibres,” says Dr. Sekhon.

But now that they had their answer, they could fight back.

Aggressive treatment to get Mary’s health back on track

As the immune system was identified as the source of the disease, the medical teams put Mary on chemotherapy medications to turn her immune system off. They also utilized a PLEX machine that would remove blood from her body, take the antibodies out from that blood, then reinfuse it — antibody free — back in.

It worked. And Mary woke up three weeks later, unaware how close she was to the brink of death.

“She was nearly dead numerous times,” says Dr. Sekhon. “But this case really encapsulates what we do here at VGH. We work collaboratively with one another, with the same common goal of taking care of the sickest patients in the province.”

After Mary woke up, it would take weeks for her to recover her lost strength, including regaining her voice.

“One of the first things I remember is not being able to lift up my neck,” says Mary. “I wasn’t able to do anything, like brush my teeth, and I was being fed through a tube.”

Mary’s body had been through an incredibly traumatic experience, and she needed time to properly recover. It would be weeks of one-to-one therapy and check-ins with doctors, but soon she started to make leaps and bounds in her recovery.

“Her recovery was unreal,” says Dr. Sekhon. “It just blew me away. And it reaffirmed what I already knew — that we’re so fortunate to have a hospital like VGH.”

On May 15 — a day after her 22nd birthday — Mary was discharged from hospital, happy and healthy. She still had work to do, but her health was improving every day.

Today, Mary has returned to school. She is also working again, and finding time in-between to relax and unwind with her boyfriend, friends and family.

“It’s changed me a whole lot,” says Mary. “Going through something so traumatic and life changing, you come out of it and you don’t look at the world the same way. You really have to cherish the time that you have here.”

By Lottery Team on November 2, 2021
Built just 5m from the ocean, on the south-west tip of Vancouver Island, this ocean cottage comes with stunning views and sounds of the surf. The prize home comes fully furnished in a natural palette with rugged stone from the rocks on the peninsula. We all need VGH, and VGH needs you. Your Millionaire Lottery […]
Read more

By Lottery Team on October 26, 2021
We're out for another tour with Todd Talbot, this time in North Vancouver! With the North Shore mountains in your backyard and views of Vancouver, Cascade East at the Pier is one of our favourite prize homes available this year. We all need VGH, and VGH needs you. Your Millionaire Lottery tickets support specialized adult […]
Read more

By Lottery Team on October 26, 2021
Join Todd Talbot in checking out an amazing prize home that you could choose in the 2021 VGH Millionaire Lottery! This stunning new home at the Soleil, ready in 2023, is massive and even features its own 1,283 sq. ft. rooftop patio in the midst of one of the area’s most vibrant neighbourhoods. Built by […]
Read more